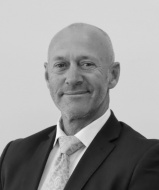 When it comes to connecting people and property, there is nothing Gary hasn’t done!

For the last 27 years, Gary has been involved in Mortgage Broking; Real Estate and Financial Planning, as well as a full time professional Rugby Referee with the NZRU. Gary is a very ‘worldly’ person, a doer, and is known around Hawke’s Bay for making things happen!!

Gary has a great ability to communicate with people from all walks of life. His skills learned whilst crafting his refereeing career internationally, taught him that not everyone communicates the same way. Just like rugby players, vendors, buyers and tenants need assistance ‘gluing’ the proposal together to get the result they desire, thus creating ‘win win’ outcomes for all involved.

Originally more residential focussed, due to starting his own Mortgage broking firm in 1995, Gary has now switched to a Commercial focus in his career.

In 2010 he added Wise Real Estate to the stable of Businesses he owned, and this capped off the list of financial services they were providing, making the task of buying a home and financing a home super easy. During this time, his business brokered over $200 million in lending and submitted over 1000 loan applications with a huge approval percentage ratio around the 98% bracket.

In 2014, Gary and his wife Karen, who is Canadian, decided to sell all their business entities and make the move for a life in Toronto, Canada. He returned in 2015 after setting up a ‘Kiwi style Bakery/Café there, and a year later sold that business to another Kiwi who had opened a 2nd franchise there with Gary.

On return to NZ, Gary sat more exams and leapt back into his passion for Commercial Real Estate. After a term with Bayleys Commercial and a brief stint at NAI Harcourts, he is now loving the specialist boutique agency environment that Gollins Commercial provides.

13Picture(s)
312m²
This modern first-floor office with lift access is situated on the fringe of the CBD.Offering a standalone 312m² (approx.) office space made up of a reception area, private offices, meeting room, staff lounge, and shower facilities. Also with the added benefit of on-site car parking for two vehicles at the rear of the building. Perfectly sized in a prime position

3Picture(s)
80m²
It’s time to come and join the happening end of Taradale. With ample parking down this end, very affordable rent, plenty of foot traffic, and the perfectly sized tenancy.This is an ideal location to start your business from or relocate your existing one too.Recently earthquake strengthened by one of the best landlords in the game, this isn't a property to miss!Negotiable terms and rent.Approx.

8Picture(s)
200m²
101-105 Heretaunga Street East is situated in a significant retail and hospitality precinct in Hastings. Located on a high-profile corner site in the centre of the CBD, this opportunity has the huge benefit of a plentiful amount of passing foot traffic, along with highly visible signage to all passing traffic. 6Picture(s)
259m²
This 259m² (approx) ground floor retail or hospitality tenancy benefits from excellent profile and a high stud height.Located in the centre of the busy Hastings CBD, it's perfectly positioned to maximise the potential of the plentiful amount of daily foot traffic.

7Picture(s)
310m²
Large retail tenancy with the option of possibly splitting into smaller tenancies. Great amenities, rear access, great parking nearby and in front. Taradale tenancies are fast filling up and there is forecasted growth for the area.Don’t miss out, get in now and grow your business as the population grows too. Awesome window frontage, what a great billboard. Buy it, resize it, lease it.

7Picture(s)
310m²
This ex-Video store has many options available to potential purchasers. With Taradale occupancy rates filling up and forecasted population growth for the area, this property lends itself to the prudent investor who is prepared to meet the tenancy demand for Taradale and resize etc.We already are speaking with potential tenants who are looking to locate to the Taradale shopping area.

8Picture(s)
130m²
This 130m² first floor office space situated on lower Emerson Street has been recently refurbished and comprises a kitchenette, glazed offices, meeting room / board room and dedicated amenities. With the added benefit of dedicated off street parking for two cars to the rear of the property. Landlord may consider short term lease.
7 Results returned.Per Page